History of the WCPAAA
Weatherford Police Department began offering a Citizen Police Academy in 1992. Graduates of the first Academy expressed an interest in an ongoing program of instruction and support.

Purpose of WCPAAA
The purpose of this organization is not only to promote a positive image of law enforcement, but also support and assist the Weatherford Police Department when requested.

McGruff the Crime Dog®
McGruff® has been a great asset for the Police Department and the citizens of Parker County. In 2001 McGruff® made regular appearances at police, community and school functions as well as parades and fingerprinting events.

McGruff® helps the officers and WCPAAA members inform the citizens of crime prevention, stranger danger and other important safety issues.

Community Involvement
The WCPAAA volunteers numerous hours of service to the City of Weatherford and the Police Department. Events include:
WCPAAA Members of the Year 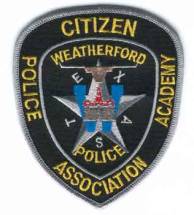