The General Plan is an official document adopted by the City that serves as a guide for making land use changes, preparation of capital improvement programs, and the rate, timing, and location of future growth. It is based upon establishing long-term goals and objectives to guide the future growth of a city.

The Development and Neighborhood Services Department maintains the most recent General Plan which was last updated in 2018. Click here to view the General Plan.

The North Central Texas Council of Governments (NCTCOG) estimates the total population in the City of Weatherford, Texas to be 28,090 as of January 1, 2019.

NCTCOG's population estimates are based on current housing inventories, building completions, demolitions, annexations and other changes in housing stock that occurred throughout the prior year.

In anticipation of future growth and development along U.S. Highway 180, the City of Weatherford, in conjunction with the planning expertise of Freese and Nichols Inc., is considering a vision plan to assist in the decision making process, orderly management of growth and development/redevelopment along this central corridor and the enhancement of the aesthetics and experience that is U.S. Highway 180, Weatherford, Texas. View the plan below to begin exploring the City's vision for this gateway to historical Weatherford. 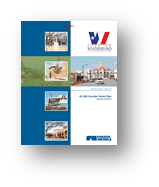